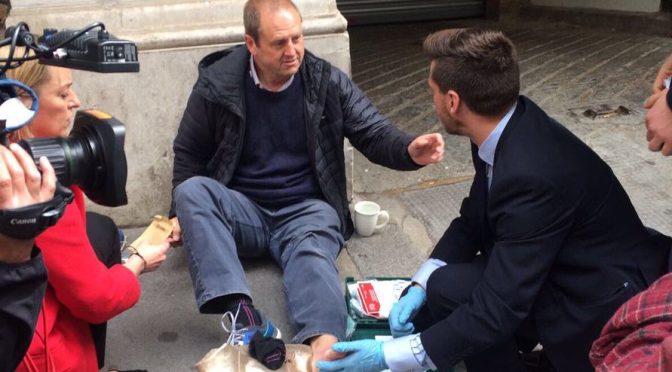 Labour leader Jeremy Corbyn has a famously testy relationship with the BBC.  Events earlier today won’t have improved things when the Corbyn’s car ran over the foot of BBC Cameraman Giles Wooltorton.

Corbyn was arriving to discuss the Labour manifesto when his driver applied the break.  Laura Kuenssberg, who has a reputation for backing the Labour leader into a corner, rushed to the aide of her colleague.  She was no doubt planning to ask Corbyn if he accepted that Theresa May was a ‘shoe-in’ on June 8.

Critics of the leader of the opposition were quick to put the boot in on-line. Labour will no doubt be issuing a statement later to heal the wounds.  Cameraman Giles was taken to hospital where he is said to be strong and stable.