Boris Johnson has been preparing for years to be Foreign Secretary. In a special BoJo guide to global diplomacy we remind you of how he has described the world leaders and nations that he will now have to work with and influence:

Barack Obama, US President –  a “part-Kenyan” with  an “ancestral dislike” of Britain.

Hillary Clinton, Democratic Nominee for US President – “like a sadistic nurse in a mental hospital”.

Queen Elizabeth ll – loves the Commonwealth because “it supplies her with regular cheering crowds of flag-waving piccaninnies.”

Greece – “They make us pay in our taxes for Greek olive groves, many of which probably don’t exist.”

The Congo – “tribal warriors who will all break out in watermelon smiles”.

Canada – Actually Boris seems to like Canada. It’s where he based himself whilst Mayor of London for much on the London Riots of 2012.

Much has been written of the impact of Twitter and Facebook on the Egyptian uprising but it’s clear from a host of protest banners that the people up in arms are from the ‘gaming’ generation. 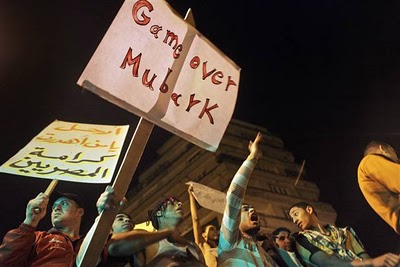 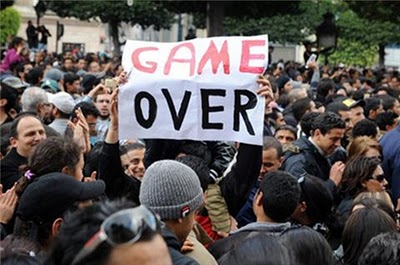 The on-line communications channels may have been blocked but the message from protesters is still very clear.

There are few groups as secretive as the Bilderberg group, the axis of politicians and industrialists that meet in secret every year and have been credited by some as the secret power behind the European Union and US administration.   It is likely that both Peter Mandelson and George Osborne will be amongst the 130 or so attendees just as they were last year but there will be no discussions about Bilderberg during the election debates.  The CEO of Google attended too in 2009.

It is unclear how influential this group actually is, but clandestine cabals run counter to the ideas of democracy.   Their ability however to operate under the radar is being unravelled by the social web. Although it doesn’t appear to be published anywhere (official or otherwise) this blog reveals where the next meeting of the Bildergroup will take place.  It took ten minutes to find out.  Here’s how.

The Dolce Sitges is fully booked for all those dates, although every other hotel in the town has rooms.  The Dolce is also away from the main town, on a cliff to and accessible via a single, easy to secure, road.  Call us conspiracy theorists if you like but if you encounter Osborne or Mandelson on the campaign trail ask them if they’re planning a trip to Spain together this summer. 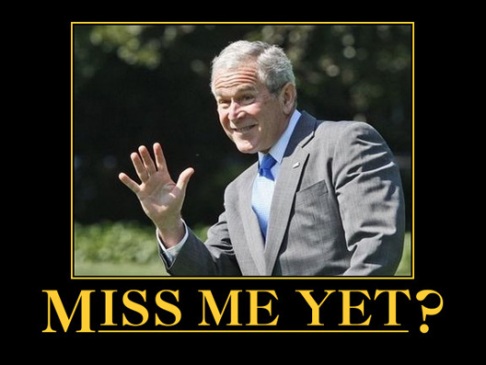 This political poster is gaining traction particularly on conservative blogs in the US.  It features a grinning George W. Bush and was initially discredited as a photoshopped hoax, but it’s really out there on the Interstate highway 35 in Minnesota. Mary McNamara, the manager at Schubert & Hoey Outdoor Advertising, the company which leases out the billboard, said  “The ad was purchased by a group of small business owners who wish to remain anonymous.” However, “some people in the group were Obama supporters.”

It is proof that you no longer have to spend a fortune on political advertising (this is a one of poster execution) to get attention.  It just has to be funny, insightful or engaging, even if the answer to the question in this case is…not really.

According to Martin Bryant writing in The Next Web, the DIY David Cameron site covered in this parish a few days ago briefly overtook both the US Republican and Democrat web sites in terms of traffic, making it possibly the most popular political site in the world, for a brief time.  Read the full story on The Next Web.

Taro Aso, the current Japanese prime minister has dissolved the House of Representatives in the Japanese Diet and signalled a general election for August 30th.  Following the significance of social media in the US presidential campaign of last year we might expect these new networks to play a significant part.  Indeed a number of leading Japanese politicians like Seiji Ohsaka of the DPJ and Gaku Hashimoto of the ruling LDP are already using twitter to comment on policy issues.

However, Japan has a 59-year-old election law that may prevent the use of twitter and other social media in the final stages of the campaign.  The law which bans posters and pamphlets has been interpreted as preventing Internet advertising.  Seiji Ohsaka has apparently been told that this law means that he must stop using twitter for the 12 days of official campaigning ahead of the election.  Ohsaka says “ It will have to be used in campaigns. It is no longer possible to say ‘don’t use it’.”

It will be fascinating to see what impact social media will have in the Japanese election and how this will impact on the campaign plans and ideas for the forthcoming UK General Election.