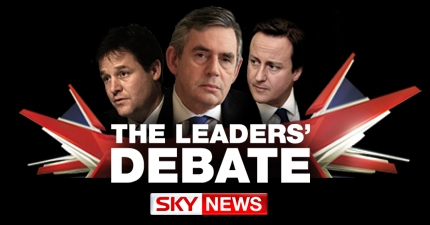 The YouGov/Sun poll gained an enormous amount of exposure on Sky TV last night when it appeared minutes after the TV debate wrapped up.  It put Cameron clearly in the lead and fired up an already excitable Kay Burley.   When other polls appeared the tale was somewhat different as ITV/ComRes, the Guardian/ICM and The Mirror all put Clegg first, with The Mirror even reporting that Cameron had come last.  So what was going on.   A quick look at twitter confirmed a broader sense of astonishment at the YouGov findings.  The tweet…

..was posted by hundreds of voters. A Twitpic that has been viewed over 18,000 times suggests that YouGov has been polling on behalf of  either the Tories or Labour to elicit voter fears in the event of the Liberals gaining a big share of the vote.

Twitter posts also pointed to the extraordinary fact that the founder and (until the start of the campaign) CEO of YouGov is a Conservative candidate. It isn’t much of  stretch to question the independence and therefore reliability of a polling organisation that may be commercially and politically aligned to one of the major parties.   In this game value and reliability are very closely linked.