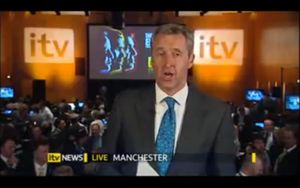 A video clip from last night’s election debate was blocked on YouTube today on the basis of copyright infringement.  Yes in case you were wondering this is the same ITV that used YouTube to pump out clips of Susan Boyle driving millions of viewers to their Saturday night ratings grabber ‘Britain’s Got Talent’. No copyright problems for that show.

So what was the real reason for the cease and delete order to our favourite clips network? ITV discovered what Skittles or the organisers of any social media conference could have told them.  Using an unmoderated live twitter feed is asking for trouble.

Nick Brett or @MullerNick as he is better known normally has an audience of 32 Followers but ITV handed him another 9 and a half million when they showed his first class commentary on Cameron’s TV debate performance.

The social media pundits, Election10 included, all said twitter would play an important role in the televised debate.  They weren’t wrong.